Gorgeclan cats are very evil cats who are very aggressive. They live in a rocky region that has a small canyon running through it.  They are very mean, powerful, and only caring to each other. Beware them.... Shadestar- Shadestar is a sturdy brown tabby tom with watchful amber eyes. He will watch over his clan until his 9th life is gone and he will still watch over them even when he's gone. Shadestar can be aggressive and can snap, even at his own clanmates, but that's rare. If there is anyone that challenges his authority, he will confront them and he isn't afraid too. He is a natural leader, but will sometimes rush into situations without thinking. In battle he is fierce and protective and will fight until he can't fight anymore. He is the leader of Gorgeclan and is 76 moons old. Cherryflight- She is stubborn and nosy. She has a BIG attitude but, underneath it, she is kind and extremely loyal. A red/brown she-cat with green eyes. Used to be a warrior apprentice but changed to a medicine cat. Her sister, Tidepaw, was in training when she went to live with the twolegs. she never saw her again. She is the medicine cat for Gorgeclan. She is 62 moons old. Tawnyflame- A very brave and loyal she-cat. Tawnyflame is very calm and collected, but kind. She is very skilled in battle and is known for blazing through battles like fire, hence her warrior name. She is a tortoiseshell with amber eyes. She is 67 moons old.

Maplefrost- A calico she-cat who is a warrior of Gorgeclan. She is fierce in battle and obeys her leader's every command. She is aggressive and hostile to enemies and strangers, but very nice to her clanmates. She hates it when cats ask her if she is ok if she is going through something. She can snap at times, but usually doesn't. She is a middle-aged warrior. She is 78 moons old.

Darknight- Darknight is a small, silver tabby warrior. His black tabby stripes swirl through his silver fur. He has yellow-green eyes and a bushy tail. He looks shy but he's not really shy. He is very thoughtful and is quiet, though he speaks his opinions. He is a very loyal cat and would never desert his clan. He is 50 moons old. 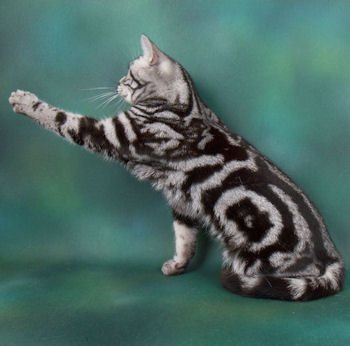 Fernheart- A small light orange and white she-cat. She is a warrior of Gorgeclan. In battle she is quick and fierce. She is very kind and loyal, but only to her clan. She is not afraid to speak her mind at all. She is very outgoing and smart. She isn't a very good hunter, but she is very fast and good at tracking scents and finding them. She is 49 moons old.

Owlclaw - Olwclaw is a mean and vicious tom cat. He is a calico warrior of Gorgeclan. He wished that Darkstrike was his mentor, and held a grudge against Fernheart, who, in his opinion, was a weak and pathetic excuse for a clan cat. He love battleing other clans and is happy to serve the most vicious clan. Even though he loves the thrill of battle, Owlclaw is not evil and would never kill another cat unless in self defense. He is 47 moons old

Brackenfang- A marble Bengal tom. He tuff and fierce and will rip you to shreds if you threaten his family (which he considers to be the entire Gorgeclan) well... don't expect to see the next morning. He has bright, yet dark, forest green eyes. He's athletic, and loves to run around. He's swift, always has been since he was a kit. He can sneak up easily on any cat, so don't expect yourself ever alone--he could be watching. His parents died and he doesn't know any other cats he's related to, but that's fine. He is 56 moons old.

Clawheart-Tabby she-cat with ice-blue eyes. She is a fierce warrior of GorgeClan. She will fight for her clan with her life, even though it is not hers by birth. She was orriginally from StormClan and her mentor was Wheattail, but she changed to GorgeClan because StormClan didn't appreciate her like they did. She got her warrior name in GorgeClan. She is 47 moons old

Miragewhisper- Miragewhisper: A mysterious cat, Miragewhisper is almost unknown territory. Her strange violet eyes always seem distant and thoughtful, sometimes her calico fur ruffling and her stiffening at nothing anyone else can see. Some are afraid of her, and they should be. Her eyes speak of some things while her face speaks of others, seeming like she's contradicting herself at all times. Sometimes she knows the answers to all questions, with a wiseness and intelligence beyond her young years. At others she's clueless and easily surprised. She has many secrets that are guarded with such a strength that so far, none have been unraveled. She's like an unsolvable riddle, confusing and strange. Most cats give up on her, and she gives up on them. Sometimes she is caught talking to herself, and cats believe she is talking to cats of the Dark Forest, learning their dark secrets.She is 60 moons old.

Briarpaw- A small and gentle brown tabby tom cat with white splotches. He is on the shyer side but is very smart and has a great memory. He wants to be the medicine cat apprentice of Gorgeclan and hopes Cherryflight will choose him. He is 10 moons old.

Toadpaw- Toadpaw is an adventurous young tom with an outgoing personality. He has a muscular build and he has a dark brown tabby coat with yellow eyes. There are times when he will tell you if he doesn't like something right away. He is a strong, loyal tom who would give his life up for his clan. If you become his friend, he will stick with the cat forever and will do everything and anything in his power to protect them. Toadpaw is 10 moons old and almost an apprentice of Gorgeclan. Berrypaw- Berrypaw is a cat beyond what you think of her. She's had a tough life, but manages to be nice to every cat she sees. A black and white cat with pale, dark green eyes that seem to have a misted feeling. She has an ivory pink nose that blends with her white fur evenly. The insides of her ears are black, as well as the outside and they both becoming a black forehead spot when they go forward, and a larger spot that stretches across her back. Her eyes are rounder and more, stretched open, than other cats. She seems to be always focusing on things that are in front, or in the back. Never two things at one time. She's confusing, but it a good ally or friend to have around. A great hunter, but isn't that skilled in fighting. She had a rather cruel mentor for the first part of her apprentice days, but that ended rather soon when her mentor had a heart failure while teaching her about the territory. Traumatized is not what she is, rather calm. But she's isn't calm, or jumpy. She seems always worried about things. Always being in the moment has put a lot of stress on this she-cat. If she wasn't in GorgeClan, she'd never had an interesting past, or be so interested in having kits. When she was in her last moon of kithood, she was very small. But through age, she got much taller and more wider.
Mentor- Fernheart