There is no set date for a prophecy. Sometimes one will come right after another and sometimes there will  be breaks in between.

Here you can post ideas on a prophecy. You can post that your character can be part of it. Example: "I could be a kit." and someone else. "And I'll have a person that is pretending to be good but is helping" Ect:..... Or, you could just give some cool ideas for one.  Cats can debate with each other and you must be fair about it. Example: "And I'll kill the bad dude." another person will say. "Well how about you and another person form a group that attacks them and it's a team effort." One cat can't take all the credit. Others can have their ideas in it too, so don't exclude cats.

Slinking in the dark

Are about to embark

A place that was shown

With hearts of two kinds

A raven that yearns

For a river's designs

A spotted cat in its wake

As an owl engages,

A rabbit is speeding

Through a pile of doubt

A thistle is bleeding

From the inside out

But guidance is near,

Right under a grove

In a shape so clear

That no one will know

A rush of wind is swept away

To a foreign place

Now it's all a disarray

To take down the ace,

To finish the fight

To get back the race

And return to the light

2.The wolf will have an elite guard of around 3 coyotes or dingos - Closed -

4. The cats meet a Mountain Lion at the end of their journey - CLOSED - RP BY DAWNSKY

Leap- She is a mountain lion with bright green eyes. She is so named because as a cub she would always leap off the lowest brances of trees, trying to get her siblings to see who could jump farthest. They all declined, however, knowing she would always win. Now Leap is old, but still fit. She is wise and kind to everyone, even if they had been mean to her. She forgives easily and believes in second chances.

The Pack lives at the base of a mountain in a pine forest. It's very rocky in their territory. Their "camp" is in a cave in the side of the mountain. They have a prison cave, which is a smaller cave that is enclosed so their is only one way out.

Lydda- Lydda is a gorgeous evil She-wolf. She has a mix of blue, white and black on her. She is a skilled fighter and despised the clan, absolutely hates them. That is why she brought up this pack to go against the cats. She would get revenge for the clans for destroying her old pack. She has no Wolves in her pack cause there are none other then her alive in the area and her coyote elites are the only one's she really trusts, the bob cats are just cause she needed more fighters. But she pretends to treat them with respect. Of course they don't no that shes pretending. She is cold hearted and very clever like a fox. She will attack any cats she sees and has a plan that will destroy them all! 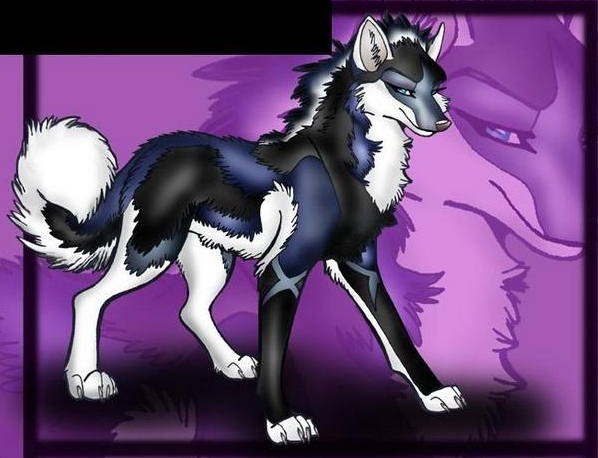 Nova- Nova is a beautiful female coyote. She has a mainly grey and white coat, but some of it is tinged brown. She has dark amber eyes that glitter coldly. Nova used to be the alpha of her coyote pack, but a sickness swept through and killed her entire pack. She was a loner when the Wolf found her. She swore to serve the Wolf in it's quest to destroy the clans. Now Nova is part of his elite guard and is ready to give up her life for him in an instant. She is devoted to him, since he took her in after she was a loner.

Shadow- Shadow is an aggressive and deadly black coyote. He is one of the three elite guards for the Wolf. He is sick of everyone driving him away from other territories, so when he found Wolf, he joined right away. He has always wondered alone before. He will listen to his leader's every word and command. He is a brilliant fighter and likes the taste of blood. He is an adult coyote with much experience.

Suja- Suja (Pronounced- Suu-ja) is a swift light pelted coyote with amber eyes. She is very aggressive and protective. She is very loyal and trustworthy....maybe....Will stand her ground against anything if its to protect the ones she loves. Suja has a scar on her shoulder from where a human had shot her. It healed but left a moon shaped scar on her shoulder.

Frost- Frost is a small female bobcat. Her eyes are a brilliant blue, hence her name Frost. Her small size also has to do with her young age. In moons, she'd be about 16, a new warrior's age. She was lost in a blizzard and was separated from her family. That was when the Wolf found her. The Wolf told her about how an army was being formed to destroy the clans. She didn't know what the clans were or anything, but she knew that she needed shelter. She agreed to join them and is a quiet member of pack. Even though she's a quiet member, she has a fierce spirit, and absolutely hates bullying and superiority. She won't tolerate it either and has the fighting skills, too.

Logan- Logan is a tough, broad male bobcat. He Was found by Lydda high up in the mountains where the bobcats we're usually found sometimes and told him about his plan against the clans. He had heard of the these cats and had only heard bad things about them since he was young so he agreed to join Lydda and her group to go and finish off these clan cats. He is cruel and mean to anyone not following Lydda. Saber- Saber is a huge male bobcat with a scar running down his side from fight with another male bobcat. He will kill in cold blood and he enjoys it. He will be loyal to Lydda until the end. He doesn't need a reason to hate the clans, he just does. Party, though, is that he wants their territory. He is still pretty young, but is a great fighter.

Emili- Emili is a female bobcat with tawny fur and dark eyes. She is fierce and bloodthirsty and won't hesitate to kill someone. She is fiercely loyal to Lydda and would snap the neck of anyone who opposes her in a second. Her brother, Eryk, found her in the mountains and brought her to join Lydda. She hopes he won't go soft on her. Emili tries hard not to live up to her girly name, doesn't want a mate, and would die before she had pups. Don't get on her bad side. 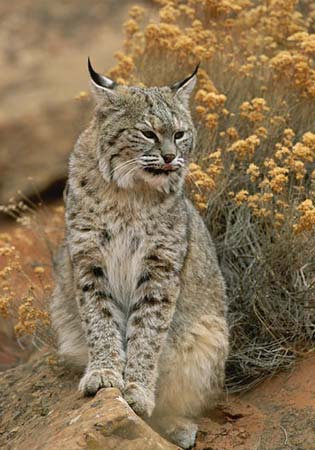 Eryk- (pronounced Eric)Eryk is a male bobcat with speckled fur and calm yellow eyes. He is virtually un-freak-out-able, and doesn't hate the clans quite as much as his sister Emili, though he would still kill them quickly and cleanly. He ran into Lydda in the mountains and agreed with her scheem to get rid of the clans. He went and found Emili, who called him Rykky(Ricky), a nick-name he had had when he was little, but he soon let her know it was Eryk now. He only is loyal to Emili and Lydda, not the elites and the other bobcats. He is a little stuck up and considers himself above them. This is one bobcat you do not want to meet in a dark alley. Speckle- Speckle is a tan bobcat with black spots and a black tipped tail. She is very protective over her son, Razor, and will always watch over him until the end. She joined The Pack when she was starving and couldn't care for Razor properly. This doesn't mean that she isn't loyal though. She will be loyal to the end to Lyda for saving her and cub. She can snap at times and is always on the cautious side.

Razor- Razor is a young bobcat. He watches the older bobcats and his fighting skills are coming alone very well. He may be small, but he is swift and agile, making him perfect for climbing. He admires Lydda and wants to be like her when he's older. He only stands the height of a young adult cat, but he has strength and a more muscular body than of a normal cats. Slick- Slick is a large and aggressive male bobcat. He is a tan/brown color and is marked with dark black splotches. Him and his brother, Sabrik, have lived together all of their lives. Slick is full of hate and rage and he wants to take it out on anyone. He will remain loyal to the Pack and Lydda.

Sabrik- Sabrik is just as aggressive and deadly as his brother is. Sabrik looks similar to his brother, but has a lighter colored pelt. He is a great fighter and they work great together. He is less destructive than Slick, and won't rush into situations as quickly. He is quick thinking and will also remain loyal. They have much in common.

Sterling- A less then beautiful bobcat with dangerously multicolored eyes that love to stare at something for a long time, Sterling loves the taste of blood and won't back down from a challenge, especially if she is threatened. Never would she dare to think about her loyalties; her heart belongs to the pack. She found the pack when she was exploring the forest, mostly in search of somewhere to go when the forest she lived in was burned down by the dreaded humans. Lydda found her and talked about her plan, sparking an interest in Sterling. Finally, Lydda persuaded the bobcat to join her army against the cats, and a bobcat like Sterling, she agreed without any questions. Sterling gets her bloodlust from her past, as she's had some trouble with cats way before she met Lydda. As embarassing as it already sounds, when she was a young cub she was almost killed by three cats, which of course made her have a long-term revenge to kill the cats who remind her of the cats that tortured her long ago. From a deeply cracked clan, chaos will rise
Black and white will join with colors and rise from the crack.
Blood will stain the grass until four become one and fill the crack up, ridding the land of evil." ((Pic was made by Kestrelcaw so it wasn't stolen))