Powerful, well-fed, and kind. Streamclan cats are loyal to the end to their clan. They live in between two large streams and they have a small group of trees. Tigerstar- Tigerstar is a muscularly built brown tabby tom with glowing green eyes. He is very caring and kind towards his clanmates, but cautious around strangers and the other clans. His first priority is to his clan, Streamclan, and it always will be. He is a quick thinker and won't rush into a situation without thinking about the consequences first. You could say that he is a wise leader and a strong fighter. In battle his lack of swiftness is overtaken by his strength and determination, which makes him a challenging opponent. He is the leader of Streamclan and is 52 moons old.

Fernwhisper- A beautiful calico tabby she cat. She has calico fur with dark tabby stripes. She got her warrior name from her shining green eyes and her calm and cool nature. She's very thoughtful but isn't all that shy. Looking gentle and kind, no one would expect that she is a fighter. Well, turns out, she's a brilliant fighter and only an okay hunter. She is now the deputy of Streamclan.

Stormblaze- Stormblaze is a grey tabby tom. He is strong and very loyal. He can be humorous at time, but also serious.  He loves his clan dearly and will protect it with his life. He is a warrior of Streamclan. He is 50 moons old.

Birchstripe- A gray tabby she-cat with yellow eyes. She is proud and defensive. kinda like Leopardstar. She is a warrior of Streamclan. She is 62 moons old. Flametail- Flametail is a red furred tom. He is strong, fierce, brave, and loyal. He is a warrior of Streamclan and hopes a little to have a family someday. He is 69 moons old.  He can be serious at times. Jaguarclaw - A small cream she-cat with brown swirls mixed in her fur. Her eyes are a dark green and brown mix that shine brightly. Jaguarclaws's muzzle is tinged with white and the tip of her tail is black. She has been training for a while now and is 48 moons old. 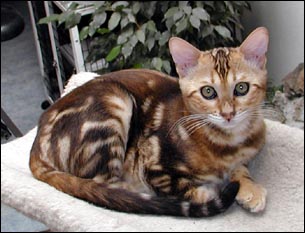 Oakfur - Oakfur is brown tabby tom with light blue eyes. His muzzle and chest are white and he is very kind. He is a gentleman of sorts and is head over heels for a clanmate of his. Oakfur is a warrior of Streamclan. He is 67 moons old.

Dawnstreak- Dawnstreak is a very loyal and feisty young cat. A dreamer and yet finds time to be serious. She knows when its not her turn to speak, yet she speaks out if she thinks something is wrong. She has large ambitions and hopes on one day becoming the leader of Streamclan, with all good intentions. Very loving and charming, she flirts with all the toms, even in battle if she thinks she can win that way.She is a Small dark red she-cat with glowing amber eyes who is warrior of Streamclan. She is 41 moons old.

Lunarscape- She is a blueish-black she-cat with pale violet eyes. She was a warrior of StreamClan and had two kits, Dangerpaw and Neverpaw, with an unknown father. But then, one day, when they were kits and she was in the nursery, she mysteriously dissapered. She came back and knows the clan has a hard time accepting her, since there is no evidence to appose that she left of her own free will. She is quiet and mysterious, and still tries to be a mother to her kits, needless to say she fails. She is still like a kit in many ways... She is 58 moons old.
Kits- Neverpaw(daughter), Dangerpaw(son)

Cherryleaf- She is a pretty reddish she-cat with sharp yellow eyes. She is a smart cat, but usually gets into trouble. For now, she wants to become the best warrior she can be. She is a warrior of Streamclan. She is 19 moons old.

Reedpelt- is a tortoiseshell tom with yellow-green eyes. He looks a lot like his sister, Juniperleaf. Only he is a bit more red then brown. Reedpelt was once a StormClan cat like his sister but joined StreamClan after he discovered he was better at swimming then climbing. Now, Reedpelt -- once known as Hawkpaw, Reedpaw-- is a proud member of StreamClan and the Clan respects him as a warrior. They act like he was born there! And good too because he has forgotten all about his sister, mother and father. Also all his friends. He is 53 moons old.

Nightmare- She is a suborn one eyed she-cat. She cat with a short slick black coat. She is pure black from head to toe with a small white scare across her right eye. When she was young a hawk attacked her eye and left it white and blind. Her reflexes are sharp and her paws are swift and silent. When she attacks she attacks with the furiousity of a thousand black leopards. Her siblings where killed by cars and her parents left where she was very young. She will listen to her leader and her deputy but when another cat of equal rank tells her what to do she will ignore them. She is in Streamclan warrior. She is 47 moons old.

Blackpaw- Blackpaw is a small black cat and is very small for a cat. He's pretty skinny. He and his sister Foxpaw were found by Streamclan, abandoned next to the river. Their mother and chased off a fox away from the kits and the Mother died in the process. Blackpaw wants to grow up big and strong and be leader one day to prove himself to his clan mates. He is now a Streamclan apprentice. He is 11 moons old. Foxpaw- Foxpaw is a small orange she-cat with a big fluffy tail. She's cute and very adventurous. Her and her brother, Blackpaw are now apprentices. She is the med. cat apprentice. She loves her new clan Streamclan and can't wait to help it when she's older.She is 11 moons old.

Mosspaw- Mosspaw is a fit gray and white she-cat with green eyes. She can be bossy at times, but is usually pretty nice. She wants to be a great warrior on day. She is 13 moons old who is an apprentice of Streamclan.

Serenitypaw- A small brown and white she-cat tabby with delicate brown eyes. She never has much ambition over becoming the leader, but always had a secret dream of becoming her Clan's medicine cat. Even though she probably won't become one. The only thing she'd never do is kill a cat, since she seems so innocent. Serenity is somewhat calm all the time, hence the name 'Serenity'. Only when times are stressful, she becomes a little anxious and nervous. She wants to either become a medicine cat, or a trustworthy and loyal warrior. She is 12 moons old. Dangerpaw- He is a jet black tom with bright yellow eyes. He is an apprentice of Streamclan along with his sister, Neverpaw. He is 11 moons old and is never without his sense of humor. He is goofy and playful, and can make absolutely anyone laugh if he really wants too. But in battle he lives up to his name, and is dangerous to anyone who opposes him without back-up. He is a great fighter and a pretty good hunter, but couldn't keep out of mischief for his life. He is a trouble maker and is proud to admit it, though maybe not so much to Tigerstar. He swears to Neverpaw that he will be a warrior that Streamclan can be proud of, when the time comes.

Neverpaw- She is a smokey black she-cat with bright blue eyes and a white paw. She is an apprentice of Streamclan and is shy and polite, only letting her real self come out when she is alone with her brother, Dangerpaw, or out hunting, which she does surprisingly well, considering that she is not the fastest cat on earth. She is fiercely loyal to her clan, but still doesn't beg to be picked for gatherings, battle patrols, or border patrols. She trains as hard as she can, and wants to be able to say that she did a good job as an apprentice, though she can't see how she ever would be able too. She is 11 moons old.

Fireflypaw- A pale orange tabby she-cat with deep, vibrant blue eyes that look in your soul. She has white paws and a white muzzle. Although her drowsy look, she's quite exciting. Like a chipmunk. Or something. She can really be a good fighter in battle, but her hunting skills are in need of serious improvement. She's not sure if she's really into love, and isn't interested in it. She is 11 moons old. Silentpaw- A very stealthy black tom. He can talk his way out of anything, or he can use his claws. Though this tom may use his claws in any situation, he is pretty nice, despite his actions. He doesn't like to be around a lot of cats. It makes him pretty angry. Silentpaw's eyes are brown, but have light and dark mixed into them. The outer rim of his eyes is a deep black, like a trench near a beautiful beach. They're filled with ambitions, some big and some small. You can't tell which is which. Silentpaw is a pretty small tom, but he still knows how to do things an average sized cat can. He doesn't want kits ever, but he has a soft spot for other's kits. He is 10 moons old.
Mentor- Reedpelt