Strikeclan. These cats have been forced to live in twoleg place. There is no other territory for them. They have a small amount of territory inside the forest, but thats really it. They are cautious, yet very strong and brave cats. Owlstar - A mottled calico tom cat. He watches over his small clan with wise, green eyes. No matter that he's been living by the twoleg place for his whole life, he has never been comfortable by them. He is a very young leader, since his former leader was swept away to Starclan by a terrible sickness. Owlstar is rebuilding the clan from the terrible sickness. He's lost 7 of his lives already, in his desperate attempt to save his clan, but to no avail. He is only 37 moons old and is determined to rebuild Strikeclan to it's former glory. He lost his six life when his camp was taken by Gorgeclan and the River of Blood Alliance. Owlstar lost his seventh life saving Molly and Poppypfall from a rat attack. Doveheart- Doveheart is a pretty white with some grey tabby she-cat. She is the medicine cat of Strikeclan and is young and has lots of energy. She loves her clan very much and hopes that the sickness that was once there doesn't come back.  She is 49 moons old. Leafblaze- Is a Strikeclan warrior. She loves the company of other cats, but all the other rouges used to push her away, saying she's to soft to run with them. She can actually fight extremely well, and isn't afraid to fight to the death for friends. She is a brown tabby with leaf green eyes, hence her name Leafblaze. She has a white paw, chest and muzzle. She is 37 moons old.

Rockfall - Rockfall is a grey tom. He is strong, brave, quite at times, and loyal. Rockfall is a warrior of Strikeclan. He is 49 moons old.

Silversong- A pretty silver-white she-cat with blue eyes. She is very protective of her kits and will kill if necessary for them. She around 59 moons old. Her mate died a few moons ago from the dogpack and she has had to survive with her two kits ever since. She is now a warrior of Strikeclan. Stonewhisper- Stonewhisper is a plain grey tom who is aggressive, but caring towards his family. He enjoys fighting overall. He is around 37 moons old and he is a warrior of Strikeclan.

Thistleshadow- A small calico she-cat. She is very kind and caring. She doesn't always like to fight but will if needed. She is better of a hunter. She isn't afraid to speak her mind. She is around 37 moons old and is a warrior of Strikeclan.

Briarclaw- Briarclaw was once a rouge named Saber. He is a muscular black tom with piercing green eyes. He will be loyal until the end to his clan and he hopes to prove himself one day. Briarclaw has turned into a strong, loyal warrior who will see to the needs of Strikeclan no matter what.  He hopes to have a family someday in the future. He prefers to keep to himself and he was once very timid, but not any longer.  He is 36 moons old.

Poppyfall - A black and white she-cat with blue-grey eyes. She is very timid and shy warrior of Strikeclan, though she is willing to fight as long as it is for the right reasons. Poppyfall loves the clan life. She used to be a kittypet, but that life seemed...wrong. Now she has found Strikeclan and she knows that his is her rightful place. She is 32 moons old.

Graytalon- A dark gray tom cat with yellow eyes. He is strong, brave, and slightly bossy. He loves climbing trees and then jumping off the lower branches. He is the more outgoing cat of him and his sister, Roseleap. He wants to be the best warrior Strikeclan has ever seen and wants to be called Graytalon. He is 36 moons old.

Robinshell- She is a pretty pale orange she-cat. She is a warrior of StrikeClan and has light green eyes. She is kind and friendly, and very defensive of her friends and family. She was mates with Aresol the loner/kittypet, but she broke up with him for the sake of her clan. She had his kits though, Coldpaw and Solarpaw. She trys to be the loyalest warrior she can, trying not to let taunts about falling for a kitty pet get to her. She is 49 moons old. Pantherwhisper- Pantherwhisper is a very sleek and handsome tom. He is really big for a cat, almost huge, but still defiantly a cat, and he might be big but he really skinny. He literally looks like a smaller version of a Panther though. He has brilliant green eyes to melt the very soul within you. Not only is he handsome but hes a great fighter too! Though not so great of a hunter. That's his downfall. He is very sweet and not really known to be a jerk. He loves kits and wouldn't mind having some of his own. He's Rabbitclaw's Brother. He is 45 moons old.
Past Apprentice- Platinumpaw(Spirit)
Kin: Rabbitclaw(sister)

Solarwind- She is a slender, pretty golden she-cat warrior of StrikeClan with blazing yellow eyes. She is funny and slightly stubborn, but nice most of the time. She hates how some cats think she is dirty or contaminated for being half clan, and works extra hard to prove she is not. She is a better hunter than fighter, but tries hard in both subjects. He is 12 moons old.

Coldstorm- He is a pure white warrior of StrikeClan with dark blue eyes. He is almost a warrior and is a great fighter, silent and steady. He can seem cold and unfriendly, but will open up to you the longer you know him. He knows his father was a kittypet, but doesn't know him, and immediately hates anyone who shows the slightest sign that they think him different or unworthy to be a clan cat. He is 12 moons old.

Platinumspirit- She is a silver she-cat with shining orange eyes. She is an apprentice of StrikeClan and is eager to become a warrior. She wants her name to be Platinumspirit. She is brave and sometimes too much, throwing caution to the winds. She isn't afraid to speak out, even if its against her clan leader's will. She is funny and playful, and will be loyal to StrikeClan till the end. She is 12 moons old. 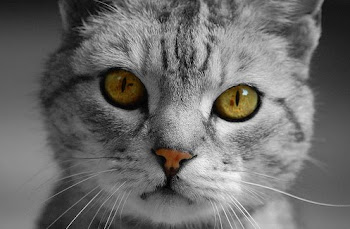 Rabbitclaw- Rabbitclaw is a Calico she-cat with very long, very sharp claws. You do not want to meet this cat in battle. She can be short tampered but loves to fool around with her friends. She is hostile towards strangers and will attack on her leader's command. She hates the ROB Alliance and can't wait for the attack on them. She's a member of Strikeclan. She is 35 moons old. Harepaw- Harepaw is a spunky but stubborn she-cat with the looks to get her places. She has those beautiful blue eyes that match the open sky very well. They glow in the dark as well as in the sun they sparkle. Her fur is a little fluffy, mostly on the sides of her face and body. It is a rich dark brown and it is mixed with other colours such as mahogany and some beige. She also has thick dark stripes that appear mostly on her head, then fade in once her side attaches to her legs. Some might say she is a little too calm, but she's far from it. She loves to be known and won't stop being nervous all the time. Even, maybe, she is anxious too do the bravest things. She always has the 'kitten' look on her face, which fools everyone. She's not a kitten anymore, and she never wants to be just a kit. She is more interested in warrior things, such as border patrols and especially hunting. Harepaw would say she's more into hunting, but is better at fighting. She isn't one to start fights, but she does know her way to find her way out of arguments and such. She is six moons old and is a loyal apprentice of StrikeClan.
Mentor- Graytalon Cinnamonpaw- A funny she-cat that loves her sister and likes to hunt. She likes to practice stalking but also loves fighting and loves a challenge. She's very fun to hang out with and is a cinnamon colored tabby. She looks nothing like her mother or father. She knows nothing of her father yet.
Mentor- Thistleshadow
Kin: Rabbitclaw(mother Mountainpaw(sister) Brindlepaw(brother) Forestpaw(brother)

Mountainpaw- She is a feisty, goofy, funny brown tabby she-cat with bright lime green eyes and creamy chest and paws. She loves looking at the mountains off in the distance, and wonders what they are like, and how wonderful they must be for her to be named after them. She is defensive and proud, but friendly and loyal to her friends. She has a temper, though, so dont get in her way, although she has a heavy conscience and feels guilty about a lot of things, even though she doesnt show it. She is a 6 moon old apprentice of StrikeClan and wants to be the best fighter in the world.
Mentor- Briarclaw
Kin: Rabbitclaw(mother) Forestpaw(brother) Brindlepaw(brother) Cinnamonpaw(sister) Brindlepaw- A handsome brindle colored tom almost like his mother but not quite so calico. She is the smartest in his litter and defiantly bright. A skilled fighter when he grows up even though he doesn't like to fight and more of the loner in the clan and prefures to be alone. He's a fast learner and learns just by watching one. He's not very strong for his small size but his good fighting comes from being swift and smart. He's the firs the find out about their father.
He is 6 moons old.
Mentor- Robinshell
Kin: Rabbitclaw(mother) Mountainpaw(sister) Forestpaw(brother) Cinnamonpaw(sister)

Forestpaw- Forestpaw is shy and quiet. He wants to be a great warrior for his Clan, Strikeclan, but doesn't think he'd be good at bit. His mother is Rabbitclaw and he doesn't know that his father really isn't Greytalon. He is good at giving advice and cares about others and their problems. Very mellow but still a good worker. He is 6 moons old.
Mentor- Silversong
Kin: Rabbitclaw(mother) Mountainpaw(sister) Brindlepaw(brother) Cinnamonpaw(sister)

Eaglepaw- Eaglepaw is also a brown tabby cat like his mother, Willowheart. He is very adventurous, like most young cats, but he is also thoughtful and cautious. He will make a great warrior someday with a muscular build. He is an apprentice of Strikeclan. He is 6 moons old.
Mentor- Owlstar
Kin: Willowheart(mother) Willowheart- Willowheart is a kind and quiet brown tabby she-cat. She is a queen of Strikeclan and adores kits, no matter who's they are. She will die for any kit, regardless of who they are or their parents. Her mate recently died from a sickness and her only kit is her son, Eaglekit. She is 40 moons old.
Kin: Eaglepaw(son)

Moonwhiskers- A pretty silver, white, and orange she-cat with some tabby in her. She is very kind and caring for her clan. She may be kind, but she will fight to the death any day for her beloved clan. She is an elder of Strikeclan. She wants Strikeclan to become strong again. She is 46 moons old and is an elder at so young because her leg was injured in a battle by a dog. Previous deputy of Strikeclan.